The Zimbabwe story encapsulates the modus operandi of Andre Vltchek: go to the region, discover with purpose, and interview people from all walks of life to get the fullest possible local views, Weltanschauung, and insightful commentary on disparity along the power continuum. 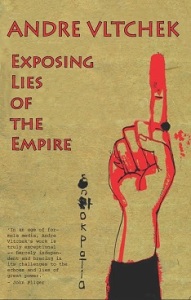 Some years back, I was approached to come up with a story that I’d really like to cover. There were many, but right away I was drawn to a story whose angle was completely marginalized in any media I had checked. I was interested to go to Zimbabwe and get a genuine impression from Zimbabweans of how they view the direction of their country under the government of Robert Mugabe. How they viewed the redistribution of land within the country.

In the case of theft, when the stolen property is recovered, the usually accepted, and rightful, custom is that the property be returned to its rightful owner(s).

Therefore, it seems a no-brainer that land that was acquired by violent theft by outsiders should be returned to the long-term occupants of that land. The white colonialists and their progeny came into occupation of that land through, to put it euphemistically, illicit means. Given that the ownership of the land was illegitimate, justice would require that the land be returned to its rightful owners (insofar as ownership of land is legitimate, which is beyond the scope of this book review.1 ) Robert Mugabe, the revolutionary who became president of Rhodesia renamed Zimbabwe, recognized this moral imperative and he set about redistributing the ill-gotten lands held by white colonialists and returning them to the dispossessed Zimbabwean people. This caused an uproar in the capitalist property-rights advocating West. The western demonization of Mugabe began with unrelenting zeal.

Later, I came across an article by Andre Vltchek that exposed the lies of western corporate/state media on the situation in Zimbabwe. Vltchek went to Zimbabwe himself and used his own eyes to observe what was the situation there. He talked to the people there to sound out their views – an eminently sensible method of getting the pulse of the citizenry: just ask them.

The Zimbabwe story encapsulates the modus operandi of Andre Vltchek: go to the region, discover with purpose, and interview people from all walks of life to get the fullest possible local views, Weltanschauung, and insightful commentary on disparity along the power continuum.

Vltchek, a true cosmopolitan, has been to about 150 lands to report on the human condition, with special concern for the victims in various regions — war zones, refugee camps, slums, and other zones of deprivation and desperation. His reportages are about casting light on the ravages of western militarism and western rapacious capitalism for the rest of the world, pulling on the heart strings of the relatively comfortable people in the West – those who can walk the streets at night, read a newspaper with coffee and breakfast in the mornings, and spend weekends in the park. It is journalism at its most selfless and most meaningful.

In Vltchek’s most recent book Exposing Lies of the Empire (Badak Merah, 2015) readers can discover through Vltchek’s words and photographs what life is like for the peoples embattled by insouciant capitalism in farflung places: to name a few — Syria, Eritrea, China, North Korea, Venezuela, Palestine, Viet Nam, and exotic locales few will have heard of, such as Kiribati.

Vltchek does not hold back as to what is harming people in the non-western lands. He points his finger — backed by evidence and compelling reasoning — at capitalists; capitalist’s bloody henchmen, the military; empire’s putschists and torturers; economic hitmen; collaborators; religious dogmatists; racists; the education (sic) system; media disinformation and propaganda; etc.

Vltchek also identifies regions of courage and progressivism: antipodes to empire. China is a proud and leading dragon, dragging its citizens out of poverty by the hundreds of millions, helping to develop Africa, becoming a financial lender that does not impose austerity on its borrowers like the hapless lands indebted to American financial institutions like the IMF. Cuba has been relentlessly maintaining and improving upon its socialist and democratic revolution despite the petty and illegal American embargo against it. Venezuela and its people have fought off attempted coups, backed, unsurprisingly, by the USA.

The West, in all its hubris and ignorance, even attempts to unsettle its banker, China, by ringing it with military bases. It does the same to the Russian bear and tries to bring it to its knees. It is difficult to envision the proud Russian people becoming subjects of empire.

The Western Empire insists on controlling everything of any substance. It has even managed to radicalize non-Christian religions, most strikingly Islam: first through the British support of Wahhabis, then through Western creation of the Mujahedeen in Afghanistan, that subsequently gave birth to Al-Qaeda, and recently by NATO’s creation of ISIS.

The Empire is only interested in controlling the world, not in its wellbeing or continued existence. (p. 39)

Vltchek laments monopoly journalism, how it is a stenographer for centers of power, how great crimes of empire go unreported. For example, he writes that in Haiti, the US medical staff, in a far cry from any Hippocratic fidelity, use the Haitians as guinea pigs (p. 53); the monopoly media marginalizes a monumental and ongoing genocide in DR Congo, a genocide that may have claimed as many as 10 million lives (chapter 8); buried in the pages of history is a German genocide carried out against Namibians in their southwest African colony (chapter 61); and currently there is the cover-up of the true composition of ISIS and who helped create this entity (chapters 27 and 67).

There are 69 chapters of jam-packed information on the lands of empire, and the lands of resistance, and the peoples. A book review can only skim the surface of this fascinating work that explores various facets of empire and resistance to empire. This is a book for everyone. Get it, read it, and become an informed citizen of earth. Find out what our brothers and sisters are resisting and solidarize with them.

In particular, people who work within corporate journalism should readExposing Lies of the Empire and find out what an authentic journalist really does.

Exposing Lies of the Empire is a monumental work. My only quibble is that because it is a collection of excellent essays, in a few places it is repetitive. However, this is a minor quibble, and it does not detract from the importance of this collection of essays.

Kim Petersen is co-editor of Dissident Voice. He can be reached at:kim@dissidentvoice.org.