In much of the Arab world, societal norms don’t promote a culture of debate. Important issues are frequently swept under the rug rather than confronted openly. For this reason, support for professional journalism is often tepid, and resistance from the people who would benefit most from it can be more oppressive than resistance from the government.

No democracy can flourish without an independent, professional media monitoring 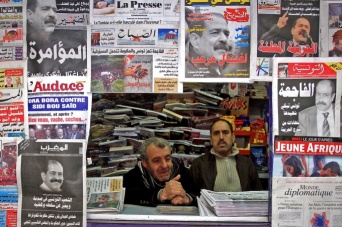 the powers that be, and for countries transitioning to democracy, this is particularly true. But in the Arab world, where millions are demanding more transparent, accountable government, media remains heavily restricted as the authorities—both the old and the new—vie for power.

Take Tunisia, the only Arab Uprising country to have fully completed a successful democratic transition. On the surface, it’s a progressive society with a new constitution that guarantees the right of access to information. In practice, however, the government has failed to follow through on this promise: there are no mechanisms to enforce implementation of this decree, so most requests for information have gone unanswered.

Government operations are entrenched in a culture of secrecy, and independent media is professionally weak. Media’s weakness also stems from a lack of proper funding. Coverage of the most recent elections was notably polarized, demonstrating how easily media can fall into the financial grip of political parties and interest groups.

But government isn’t the only obstacle. Arab society poses its own challenge. In much of the Arab world, societal norms don’t promote a culture of debate. Important issues are frequently swept under the rug rather than confronted openly. For this reason, support for professional journalism is often tepid, and resistance from the people who would benefit most from it can be more oppressive than resistance from the government. This makes breaking through a challenge, but experience has shown that if anyone can disrupt this status quo, it’s investigative journalists themselves.

Case in point: in Jordan, Arab Reporters for Investigative Journalism (ARIJ) launched an investigation into a loophole in the Jordanian penal code that allowed rapists to avoid punishment by marrying their victims. The investigation found that rapists often stayed in these marriages for only one month of the required five years. Thus, the victim, often now with child, was denied legal protections or access to support mechanisms while the rapist escaped any meaningful punishment.

The ARIJ investigation rallied public attention around this delicate and rarely discussed issue. After publishing the story, we were contacted by the local branch of the International Women’s Forum, which convened a meeting to discuss the findings of the investigation and next steps. The meeting was attended by legal experts, public opinion shapers, and women members of parliament. Momentum grew, and now the Jordanian government is in talks about reforming the law. This is but one small example of the power of investigative journalism.

Since 2005, ARIJ has supported investigations like this across the region through funding and coaching. Our thorough training program for investigative reporting has helped over a thousand journalists. From the moment they pitch us their story ideas, we support them through the entire reporting process, from developing an initial strategy to fielding inquiries post-publication.

Recently, we also started integrating faculty from university journalism programs, and developed a three-hour-credit curriculum that is now being taught at five Arab universities. Some of these, like Lebanese American University, have offered the course for three semesters in a row. In Tunis, with the help of ARIJ and in collaboration with the State University of New York, the first master’s program in investigative reporting in the Arab region was launched.

The future of investigative journalism depends on our ability to create a critical mass of investigators. Just 10 good investigators are enough to make an impact in any country. They become role models for other journalists, and a force for bringing social issues to the foreground in societies where people have no voice, dignity, or justice.

ARIJ is helping to foster this change, but it’s a slow process. As they say in the Arab world, we are not planting tomatoes, we are planting olive trees. It takes time, but once the tree has taken root, it will stand for years to come.