Read the news and watch the story behind the story.

Twenty Magistrate and Circuit Court judges of Ghana implicated in the judicial corruption scandal exposed by journalist Anas Aremeyaw Anas have been sacked following the investigations into their conduct. Another one was reprimanded and reinstated by the five member committee headed by Justice Sophia Adiyira, reported leaderstandard.com.

Watch this Al Jazeera movie to know the most courageous job.

The dismissal followed a thorough investigation into allegations of corruption in the judiciary, said Chief Justice Georgina Theodora Wood as quoted by media on 8Th Dec 2015.

Some of the affected judges and magistrates were dismissed without benefits, while some will be entitled to benefits.

Anas and his Tiger Eye PI team have handed over 500 hours of video evidence to Chief Justice Georgina Woode reportedly capturing about 32 judges and over 100 judicial service staff taking bribes to alter justice. 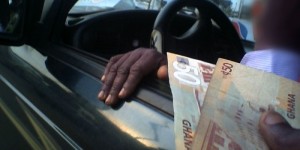 The judicial council would take “prompt and resolute” action to “redeem” the image of the judiciary, Wood said.

The CJ has given the strongest indication that more judges are likely to face sanctions in the coming weeks once the probing committee finishes with its work.

Ten of the 12 judges of the High Court also implicated in the scandal are now under suspension, while still being investigated by the disciplinary panel set up by the Chief Justice.

According to newswirengr.com,over a period of two years, the award-winning investigative journalist secretly filmed 12 Ghanaian High Court judges, 22 other judges, and 140 court officials accepting bribes. While exposing their corruption, his actions also led to the release of alleged murderers and rapists.

In early September this year, after behind-the-scenes negotiations with the President of Ghana and the country’s Attorney General, Anas released his findings to the people of Ghana, unleashing a constitutional and political crisis of a kind not seen since in the country for decades. As Kofi Annan, former UN secretary-general and one of Ghana’s most famous sons, says in the film, “Sometimes it takes a spark, just a spark, and I think Anas has provided that spark for the whole edifice to blow up.”

Justice! is an insider look at this most unconventional reporter on his most controversial story yet, at the dreadful ethical dilemmas involved, at his fears for his own and his family’s safety, and the pressures exerted to silence him.

According to IAIN MARLOW of theglobeandmail.com, Mr. Anas often works on several levels simultaneously. He is a private detective with a business called Tiger Eye P.I. (there are hand-painted images of tigers on the walls of the office), sells videos of his investigations, co-owns a newspaper called The New Crusading Guide, and works with foreign media as a journalist and investigator.

The gas-station operation, for example, was a collaboration with German reporters who traced their investigation of Internet scammers to West Africa, where Mr. Anas finished it off.

It was also, obviously, in collaboration with the police. This journalist-government partnership was born of widespread frustration with Ghana’s chronically weak institutions. Despite being one of Africa’s most stable democracies, Ghana’s government lacks the resources to properly enforce its laws.

While unorthodox for journalists, this type of collaboration is widely viewed here as essential to the sometimes messy task of building a strong state. The government even approaches Mr. Anas with suggestions for investigations, sometimes of its own employees. 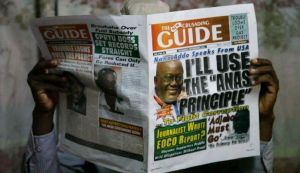 Nana Essilfie Conduah, chair of the journalism program at Accra’s African University College of Communications, said that although some of institutions targeted by Mr. Anas remain in bad shape, this type of journalistic partnership can benefit society. “The system has necessitated this,” said Prof. Conduah. “Until there is a modicum of cleansing … [we] will have to be dependent on this sort of arrangement to at least find a balance towards making the system work.”

Mr. Anas is more blunt. “What I’m doing is necessary in every country,” Mr. Anas said. “All the mechanisms are there. We need to whip the people into line.”

WHO IS FEARLESS ANAS

By Hannah Onifade  Posted on venturesafrica.com

Anas Aremeyaw Anas is an undercover journalist who specializes in print media and documentaries. Working both on his own and in collaboration with other news agencies and journalists, he has successfully ensured that corrupt acts and practices are exposed in Ghana and other parts of sub-Saharan Africa. Recently, he has been in the news for exposing corruption in Ghana’s justice system. As a result, he has received several lawsuits and petitions as the judges involved in the scandal are being called into accountability.

The man behind it all

For an African journalist, Anas Aremeyaw Anas goes about his business in a very unconventional manner. While his name may not ring a bell in the minds of the average African, he has broken some of the biggest stories in Ghana and is responsible for a lot of convictions for various crimes in all spheres of government.

Anas has been referred to as Africa’s most feared and famous sting artist. His life and work is dependent on his power of maintaining anonymity.

Aptly nicknamed ‘Chameleon’, Anas’ modus operandi is achieved through numerous disguises. Over the course of his career, he has masqueraded as a bartender, a psychiatric patient, a prince, a trader dealing in contraband, and a madman. His work is no different from that of an agent provocateur and he takes immense pride in his achievements, reflected in his “Name, Shame and Jail’ mantra. Anas keeps a low profile, and very few people have actually seen his face.

It is perhaps his relentless pursuit of criminals and corrupt public officials around the continent, that has undoubtedly created enemies for him, driving his anonymity.

Anas reportedly grew up in a military barracks in Ghana and attended the University of Ghana. He turned down a job offer with the Ghanaian Times Newspaper, instead choosing to work with the Crusading Guide newspaper in 1998.

Although Anas began as a private detective and undercover reporter, he has since been employed by the Ghanaian President and Al Jazeera. His training as an attorney gives him an appreciation of the legal dynamics of his work. Anas focuses on issues of human rights and anti-corruption in Ghana and sub-Saharan Africa. So far, he has spearheaded undercover investigations to expose the Tanzanian trade in albino limbs, contract killing of disabled children in northern Ghana, high-level corruption in Sierra Leone, the counterfeit gold trade in West Africa, and money laundering in the Seychelles.

In 2014, a documentary he was the subject of a documentary, ‘Chameleon’, which chronicled his achievements. The documentary also revealed the challenges he faced working undercover.

Anas works mostly as a multimedia journalist who specializes in print media and documentaries and in 2013, Anas gave a TED Talk (throughout which his face remains hidden), titled, “How I Named, Shamed, and Jailed”.

In what is perhaps Anas’ biggest break, he is at the root of the recently broken Ghana Judiciary Scandal, where he went undercover to expose corruption within the Ghanaian Judiciary sector and successfully leading to the suspension of over 20 judges.

Anas has been widely recognized for his work in upholding the dignity of individuals and fundamental human rights. President Obama highlighted his virtues in one of his speeches and dubbed him “a courageous journalist…who risked his life to report the truth.”

He has participated in the successful prosecution of offenders, including fetish priests who sacrificed children in Northern Ghana. He has also won over fourteen international awards for his investigative work. He was polled as the 5th most influential Ghanaian in 2011 and named one of the “Most Influential Africans of the Year “by the New African Magazine.

Anas’ life and work has inspired journalists and citizens all over the world to speak the truth.