Research last year out of Stanford University revealed that students – from middle schoolers to undergraduates – are easily duped by false information they find online. The study goes on to describe this as “dismaying,” “bleak” and a “threat to democracy.”

These same students are the primary consumers of social media, and many of them will be eligible to vote during the 2020 election cycle. How are we to prepare young people to become informed citizens in an era where anyone can publish, and there are political and financial incentives for misinformation?

As a journalism professor who began my own media career as a high school student, I have a firsthand understanding of how teaching journalism can prepare young people to become effective communicators – and can help them sift fact from fiction.

Challenges of the age of misinformation

In an alleged “post-truth” reality, language can be used in ways that resemble a war game of wits. Words can cast doubt on previously accepted standards, and shared norms once considered common sense can suddenly be cast as suspect.

Take, for instance, the term “fake news.” Within weeks of it surfacing as a way to describe a rapid rise in internet misinformation, the term was misappropriated by several politicians and pundits to describe a supposedly biased mainstream media.

The 2016 election uncovered the surreptitious power of misinformation and its potential to influence the public. Buzzfeed found that fake news stories significantly outperformed real news stories on Facebook leading up to the 2016 election. One fake news writer was even accused of singlehandedly swaying the election. A subsequent Pew Research study indicated that 23 percent of Americans claim to have shared a made-up news story – either knowingly or not.

Whether it’s labeled “fake news” or newfangled propaganda, misinformation undermines institutions and spreads baseless beliefs. It’s also likely to have a long-term effect on the next generation of voters. 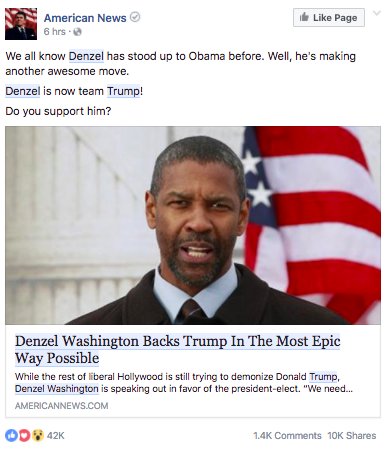 This Facebook trending story is 100% made up.
Nothing in it is true.
This post of it alone has 10k shares in the last six hours.

Curricular standards now emphasize “critical thinking” as a cornerstone of contemporary education. Critical thinking speaks to a need for young people to become discerning interpreters of information and to make judgments based on thoughtful analysis.

Yet, the term’s meaning remains elusive for many educators, and clear methodologies for cultivating it are scarce.

I prefer the term “informed thinking” to describe a deeper level of student engagement, one that my research indicates can better prepare young people to effectively navigate the complex and nuanced landscape of modern news and social media.

An informed thinker is someone who has researched a topic and has been thoughtful in making sure that what he is presenting is credible, valid and well-researched. Informed thinking articulates a clearer method and result than critical thinking. Students learn to detect biases and agendas in media and are empowered to distinguish fact from fiction.

I would argue that this approach makes students more than savvy consumers: Informed thinkers become effective problem solvers, emerge as content creators and learn to advocate for public good. The Maine Department of Education formulated this perspective 20 years ago and has since adopted it as a guiding principle.

Journalism in the classroom

My research builds on a legacy of previous studies that confirm that students who have journalism or publication experience earn better grades and test scores than their peers who do not. They also develop more effectively as informed thinkers.

At the University of Oregon, our School of Journalism and Communication and our College of Education have partnered with education thought leaders Esther Wojcicki and Tara Guber to develop and pilot curricula for middle schools and high schools that get to the heart of these matters. The Journalistic Learning Initiative (JLI) is an experience-based program designed to enhance existing English Language Arts courses with specific emphasis on information gathering, storytelling and publishing.

During the 2016-17 academic year, JLI facilitated programs at Oaklea Middle School and Springfield High School, both in Oregon. According to an independent assessment (not yet published), 85 to 90 percent of the participating students agreed that the journalistic skills learned in JLI were useful and relevant.

In September 2017, JLI will expand to include four more Oregon schools, and two in Los Angeles.

There are other programs with similar missions: the Journalism Education Association (JEA), which offers training and support for student publication advisors; the News Literacy Project, a nonpartisan nonprofit that brings working journalists into classrooms; and the Center for News Literacy at Stony Brook University in New York, which offers news literacy course materials online. While these programs can all support the work of teachers and advisors, JLI excels by embedding its methods into an existing curriculum.

Student media programs are by no means a new phenomenon, but recent trends suggest that student newspapers are in decline. Journalism programs, where they exist, rarely count as English credit. In my experience they’re typically underfunded afterschool programs or are offered under the guise of yearbook clubs. There are few courses or curricula that teach media literacy, research fundamentals and content creation technology.

The Common Core State Standards call for 70 percent of the texts emphasized in an English Language Arts curriculum to be nonfiction by 12th grade. The standards also stress the importance of media creation.

Though journalism doesn’t have the same curricular status as Advanced Placement or Honors English, it does embody important fundamentals common to these – and most – educational standards: research methods, content creation and media literacy. What’s more, it’s an opportunity for educators to play a part in helping students become truly informed thinkers.

As misinformation continues to plague the public, journalism education presents a familiar yet untapped resource.