Why Japanese ran after newspapers on April 1, 2019 . They wanted the issues as precious memento. Japanese newspapers announcing the new “Reiwa” era are being auctioned online for high prices.

Let’s be honest: it’s not every year a new era begins. The last time it happened in Japan was thirty years ago, when Emperor Akihito ascended the throne and the Heisei era began. That’s why it’s no surprise that people would want to commemorate the announcement of the upcoming Reiwa era and the ascension to the throne of Crown Prince Naruhito.

And what better way to remember the occasion than to keep a newspaper from April 1, the day when the announcement was made, and when it would be on all of the headlines?

Our own Mr. Sato happened to be in the Shimbashi Station area in the early afternoon on April 1 when the announcement occurred, only to find more than one thousand people filling up SL Square, despite it being a Monday. There was no giant television to broadcast the announcement, however, and no formal press release in the square. In actual fact, all of those people were waiting to buy the afternoon newspapers announcing the new name.

When the clock struck 1 p.m. and the newspapers went on sale, people pushed and shoved and fought to get a copy. Apparently there were even people stealing newspapers from others! Some were trampled underfoot, and the Square echoed the sounds of screaming and shouting. It was all in vain for many, however, as within minutes they were all sold out.

Similar scenes of roiling crowds were spotted in other parts of Tokyo, as well. In Ikebukuro, a crowd so tightly packed that no one could move seemed to undulate and shiver with the tension of the people inside it.

In Osaka, as well, people swarmed the tiny newsstands with the hopes of getting a copy:

Unsurprisingly, however, it appears that not everyone was buying newspapers to remember the occasion. Most, it appears, wanted to use the occasion to turn a profit, since many of April 1’s afternoon newspapers were almost immediately listed for sale on online auction sites, like the flea market app Mercari and Yahoo! Auctions. 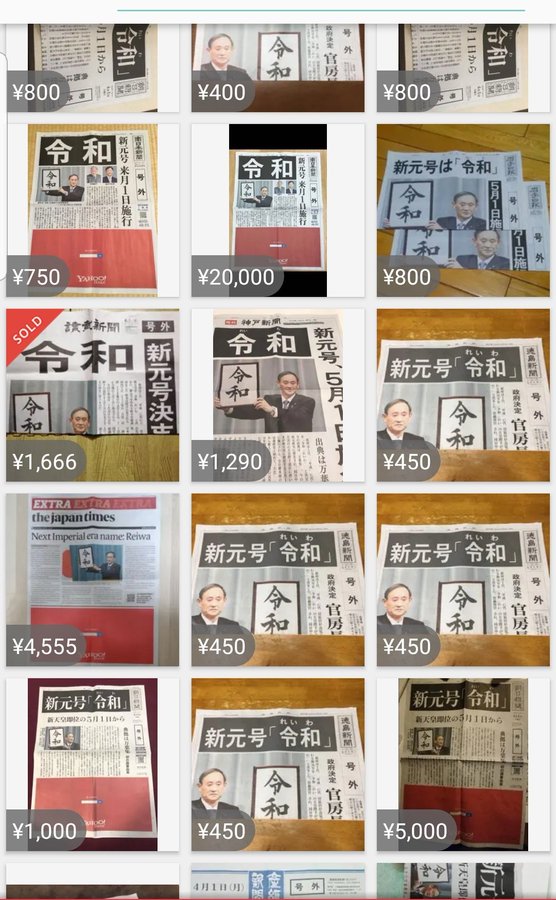 A scroll through the listings show prices averaging around 1,000 yen for a single paper(about US$9), but one of the most expensive was asking for as much as 20,000 yen! Many of the listings were already sold out, too, in spite of the fact that later newspapers would also commemorate the announcement.

Mr. Sato himself was rather disturbed by the pushing and fighting he saw in SL Square near Tokyo Station, so he left the area quickly.  Some on Twitter expressed similar sentiments:

“People trying to get newspapers are screaming “help!” Shimbashi Station is an illustration of hell, filled with the screams of the fallen. World, this is Japan.”
“My little sister’s foot was stepped on by someone’s high heel.”
“Don’t sell your Reiwa newspapers!”
“Looks like it’s going to be an era of greed…”

One compared people shoving to get newspapers to people lining up quietly for supplies during natural disasters.

▼ “When it’s a matter of life or death, people will stand patiently in line waiting for food rations. But when Japanese people find something rare and limited…” Another even kindly noted (perhaps too late) that there is a PDF version being distributed freely: 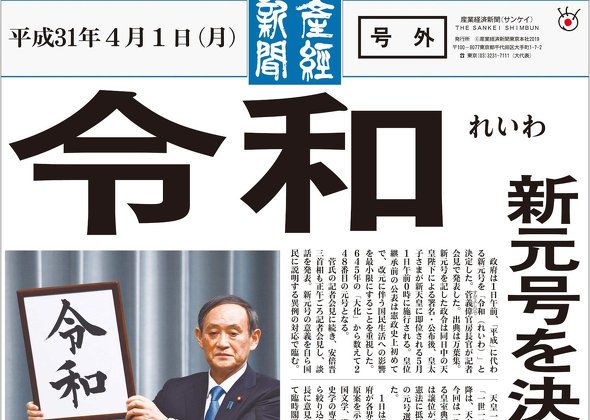 Most, however, expressed joy at having been able to get a copy. Luckily, in many, less crowded places, people were able to easily purchase one without any pushing and shoving needed, like in Yurakucho, just minutes from Shimbashi by train. 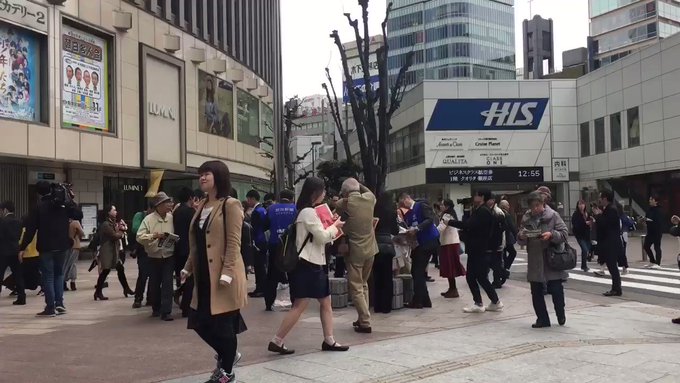 Certainly it’s a nice memento to have, but is it worth paying thousands of yen for a paper, or worth suffering the pushing and shoving to get one, or to make a few extra bucks? Perhaps, perhaps not. It is worth remembering, however, that violent greed is not something limited to Japanese people looking to collect a rare item. Just ask anyone who has ever gone Black Friday shopping in the U.S!