One of the stranger parts of rewatching Page One, the 2011 documentary about media reporting at The New York Times, is the presence of Julian Assange, who was at that time in his earlier days of leaking classified or otherwise secret information — initially via open platforms like YouTube, later in partnership with some of the world’s top news organizations. The various journalists and talking heads debate the right way to think of Assange and WikiLeaks — are they a source? a rival publisher? journalists? activists? — but the overall framing is that this is a new player on the field, and journalism is going to have to figure out ways to integrate it, respond to it, or otherwise engage with the new reality WikiLeaks seemed to portend. Bill Keller, then executive editor of the Times, says at one point: “The bottom line is, WikiLeaks doesn’t need us. Daniel Ellsberg” — leaker of the Pentagon Papers to the Times decades earlier — “did.”

As volatile an addition as WikiLeaks seemed at the time, on second viewing it feels like a simpler age — before Guccifer 2.0, before Seth Rich conspiracies, before embassy-as-hermitage, before President Trump. But where exactly Assange’s apparatus — dedicated to transparency, it says, while an actor on behalf of a foreign government, officials say — is still a matter of some debate.

So when Julian Assange was arrested this morning in London — after Ecuador, his diplomatic landlord since 2012, withdrew his immunity — it raised a set of old questions in a new context. Is Assange a journalist? Is the act of publishing newsworthy government secrets always journalistic, even if prompted by a foreign power? Does publishing not-particularly-newsworthy emails hacked from a private citizen earn the same benefit of the doubt? And is Assange facing charges as an enemy of the United States accused of real crimes or as a journalist being harassed by a government whose secrets he revealed?

Thankfully, Twitter figured this all out pretty quickly, as always.

The charges Assange faces in the United States do not directly relate to his publishing activities. Instead, he faces one count of “conspiracy to commit computer intrusion,” alleging that Assange agreed to help Chelsea (then Bradley) Manning by trying to crack the password on a Defense Department computer in order to obtain classified government documents, which would then be leaked to WikiLeaks. That he wasn’t charged with espionage — which would have more directly entangled the act of publishing secrets with questions of press freedom — was a relief to some who’d been worried before the charges were unsealed. But not everyone was convinced, seeing in the conspiracy charge a lot of standard journalistic behavior. And more charges — with more potential complications for journalists — could be coming.

As for the actual US charges, well, both the indictment and evidence are sealed, so we don’t know. But it’s clear that if Assange is charged under the Espionage Act for publishing leaked documents, that would be a major threat to press freedom. https://freedom.press/news/prosecuting-wikileaks-publishing-activities-poses-profound-threat-press-freedom/ …

As @emptywheel lays out here, a case against WikiLeaks and Assange is likely to set a dangerous precedent that can be used against mainstream investigative journalists like @JasonLeopold: https://www.emptywheel.net/2018/11/16/the-theory-of-prosecution-you-love-for-julian-assange-may-look-different-when-applied-to-jason-leopold/ …

In the wake of confirmation that Julian Assange has been charged, a lot of Assange haters are rooting for a theory of prosecution that might pose grave risk to Jason Leopold and other journalists.

24 people are talking about this

UPDATE: US gov charges Assange with 1 count of conspiracy to violate CFAA (anti-hacking law) for agreeing to help @xychelsea crack a password on a Department of Defense computer, to help her hide that she was WikiLeaks’ source of classified docs. https://www.justice.gov/usao-edva/pr/wikileaks-founder-charged-computer-hacking-conspiracy … 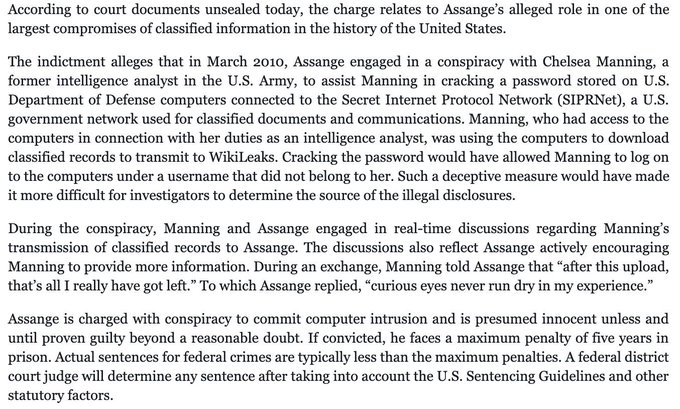 So the CFAA charge is clearly a pretext, a way of punishing Assange for publishing classified documents without actually charging him for it.

But the fact that DOJ went out of its way to avoid charging him for publishing means this doesn’t set a dangerous precedent.

If the goal was to punish Assange without actually dangerous precedent that could criminalize investigative journalism, then the DOJ succeeded. As former DOJ spox Matthew Miller said: 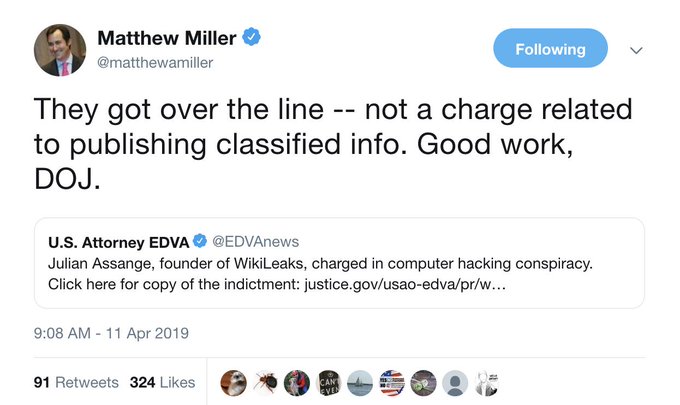 I think it’s shitty and kind of unfair to go after Assange on a vague CFAA charge if you’re really upset about him publishing classified information.

But it’s at least better than the alternative of actually criminalizing the publication of classified information.

The belief that Assange is a Russian agent has always been painfully stupid (and, I should note, completely without evidence). But if you’re someone who decided to believe that, then you’d have to see this as another case of Trump taking actions directly harmful to the Kremlin.

Here’s the Trump DOJ announcement about its indictment of Assange. It relates *only* to the 2010 classified docs about the Iraq & Afghanistan War logs & diplomatic cables. It has nothing to do with the 2016 election. This is huge attack on press freedom https://www.justice.gov/usao-edva/pr/wikileaks-founder-charged-computer-hacking-conspiracy …

Julian P. Assange, 47, the founder of WikiLeaks, was arrested today in the United Kingdom pursuant to the U.S./UK Extradition Treaty, in connection with a federal charge of conspiracy to commit

What’s more likely: Donald “I love Wikileaks” Trump wants his doj to prosecute assange because of Russian interference on his behalf or…The Trump doj is eager to set a legal precedent they think could allow them to prosecute “the enemy of the people?”

423 people are talking about this 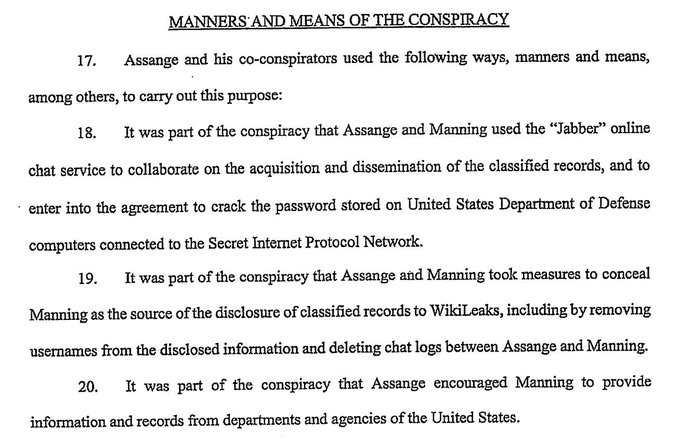 On first pass, the Assange indictment seems pretty flimsy. Assange supposedly agreed to help crack a password AFTER Manning gave WL all the docs they published. DOJ isn’t even alleging anything came of it. The “manners & means of conspiracy” section is all regular journo conduct:

160 people are talking about this

The Assange indictment seeks to allay press freedom concerns by focusing on an allegation that he tried to help Manning “crack” a DOD password—i.e. entering into a conspiracy to steal rather than simply receiving info. https://www.justice.gov/usao-edva/press-release/file/1153481/download …

124 people are talking about this

The US charged Assange with, essentially, helping a source hack into a DoD computer by cracking a password. While journalists do publish material that is gathered by sources, we don’t help the sources pick the locks on the safes that hold the information.

152 people are talking about this

This is key. There are reasonable arguments to be made about charging hacking vs publishing but the argument that Assange would have to be a “journalist” as defined by peers or governments is not solid.

First Amendment protects the freedom to publish, an act, not some invented class of people called journalists. Otherwise, the government decides who is a journalist, which means who deserves protection and who doesn’t. Down that road lies tyranny.

The IRA activated &renamed old accounts in the days leading up to Wikileaks dumps, used them specifically to socialize drops & promote the material. They praised Assange as a noble freedom fighter across other accounts, to all audiences (left, right, Black community) #RogerStone