By Charlie Warzel,  Source: The Newyork Times *The Privacy Project

The internet processes so much information that it’s impossible to map. YouTube uploads 500 hours of new content every minute; Google processes 3.8 million searches per minute; Facebook has 2.32 billion users (as of the end of 2018). The numbers are fun bits of trivia and yet so large that our brains can think of them only in the abstract.

That is why I enjoyed Netflix’s new documentary “The Great Hack.” It follows three people wrapped up in the Cambridge Analytica scandal over the past two years: Prof. David Carroll, who sued the company for his personal data; the journalist Carole Cadwalladr, who reported on the story for The Guardian; and a former Cambridge Analytica employee, Brittany Kaiser.

What I liked most about the documentary is that it exists at all. Despite dominating headlines for months during 2018, the Cambridge Analytica saga is a complex story about shady, still only somewhat-known business tactics set on a global scale. The revelations unfolded slowly over the course of many months in the realms of politics and technology. Which is to say that it’s not an easy story for casual readers to follow. But the two-hour documentary charts the twists and turns of the scandal effortlessly, and if you put in the time, you are likely to come away with a sophisticated understanding of the entire debacle. Bonus points: It’ll probably freak you out.

But the real success of “The Great Hack” is how it lays out the stakes of uploading our lives online. As I’ve written before, Cambridge Analytica was a watershed moment in our current, slow-moving privacy reckoning. For many, it was the first revelation that our personal information — our likes, status updates, pictures, check-ins and even the network maps of our friends and mutual friends — could be collected and sold to political mercenaries.

It’s still unclear exactly what role psychographic profiling played in influencing votes during Brexit or the 2016 election, but the real legacy of Cambridge Analytica is more about the stakes of our mundane data than it is about outcomes. At every moment online, we’re constantly shedding data; some of it willingly, some of it surreptitiously (the film illustrates this data-shedding elegantly with a number of fancy graphics that show pixels invisibly flaking off us like dead skin cells, only to be harvested in the clouds). In the moment, most of it seems trivial, but in the aggregate, that data has very real consequences.

Cambridge Analytica represents the worst of these consequences, which is the muddling of the democratic process to the extent that it’s impossible to know whether we’re having fair elections. The documentary lays out a few of the company’s manipulation tactics, including a campaign to use social data to engineer political apathy in Trinidad and Tobago to ensure that younger black citizens didn’t show up to vote. And undercover footage sheds light on the insidious nature of modern political advertising across the internet. In one scene a Cambridge Analytica executive describes a “Crooked Hillary” Facebook campaign to influence voter sentiment in the 2016 election this way: It “infiltrates the online community and expands but with no branding. It’s un-attributable and un-trackable.” A pretty succinct explanation of our current information apocalypse.

For all its focus on one scandal, “The Great Hack” isn’t just about Facebook or Cambridge Analytica but also about the hidden power of our personal information. During a voice-over near the end of the film, David Carroll remarks that “by the time my daughter is 18, she’ll have over 70,000 data points defining her.” What the film succeeds in doing is showing the consequences of those data points, how they’re bought and sold and leveraged and combined with other information to manipulate us and generate profits. The Cambridge Analytica scandal woke many of us up to this idea and the film continues that legacy, reminding us that our online lives have very real consequences.

From the Archives: 23 to Study Computer ‘Threat’\ 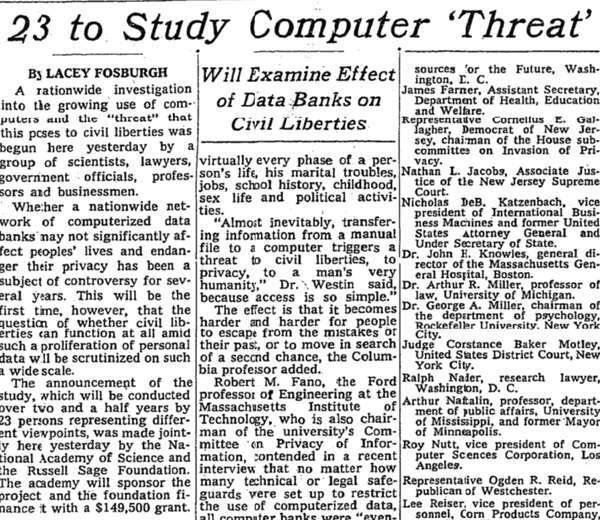