The report reveals that Reach of print, television, radio and cinema vis-à-vis the previous IRS quarter, largely remains unchanged. Internet as a notable exception continues to grow. Consumption of news on digital platforms is on the rise. And whilst Total Readership (TR) of publication remains steady, Average Issue Readership (AIR) has seen a marginal decline.

The decline of AIR between Hindi and Regional dailies are visibly a continuing trend while the English dailies managed hold itself without any fall in AIR. Compression of Read Yesterday – AIR between IRS 2017, IRS 2019Q1 and IRS 2019Q2 shows that the All India AIR percentage of Hindi dailies had fallen from 7.2 to 7.1 to 6.7 per cent respectively, while Regional dailies has fallen from 8.7 to 8.4 to 8.1 respectively. 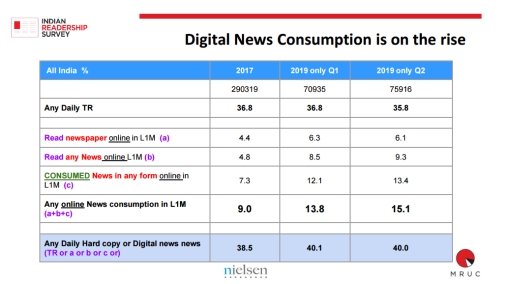 The declining trend was similar in Rural AIR of Hindi and Regional dailies while English dailies managed to hold on with neither growth nor drop in its AIR.

In terms of Magazine Readership, the TR and AIR of Magazine remained unchanged across India.