According to the Hammerkopf Consumer Snapshot Survey conducted on 28th March 2020 across 1,300 people in New Delhi, Mumbai, Bengaluru and Chennai, over-the top (OTT) media consumption too saw a spike, with 71% people watching more than a week ago. 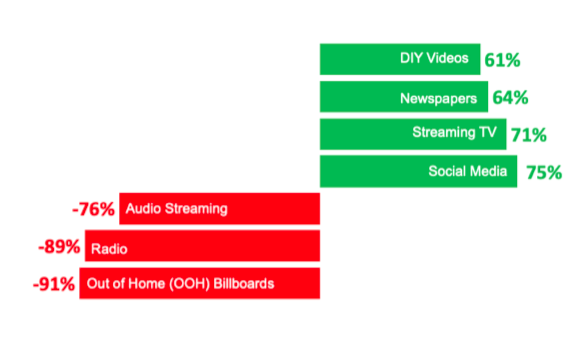 OTT consumption through apps like Hotstar, Netflix, Prime Video is on the rise, with the primetime for OTT consumption this week starting at 7 pm onwards, unlike a week before, when it was 10 pm – 12 am.

However, the lockdown situation has resulted in significant decline of Radio and Music streaming consumption this week with 89% of those surveyed confirming listening lesser to them due to lack of commute. Out-of-home (OOH) media lost more eyeballs this week, with 91% of consumers seeing less billboards than a week ago.

Study revealed that Internet browsing saw a 72% spike, than a week ago, with people turning to it for information and news on the pandemic. Digital consumption also continued to remain high, with more Indians seeking DIY videos, essentially for downloading home-cooking guides (89%), to maintain health and fitness apps (88%), and to seek new learning opportunities on edtech apps (88%).

Social media usage got more eyeballs this week, with 75% of consumers indicated spending more time on social apps, including WhatsApp, Twitter and Facebook than a week ago, especially for consuming news, and for communicating with loved ones. Peak social media usage was spread evenly through the day. On an average, Social media consumption before the lockdown was nearly 150 minutes per day. In the first week of lockdown, that figure jumped to 280 minutes per day.

In addition to incumbent social media apps it is interesting to note the advent of a new cohort of apps, such as Zoom Video and House Party, that brought families and friends together. Similarly, gaming apps like Ludo and Bubble Shooter saw a spike in their usage. 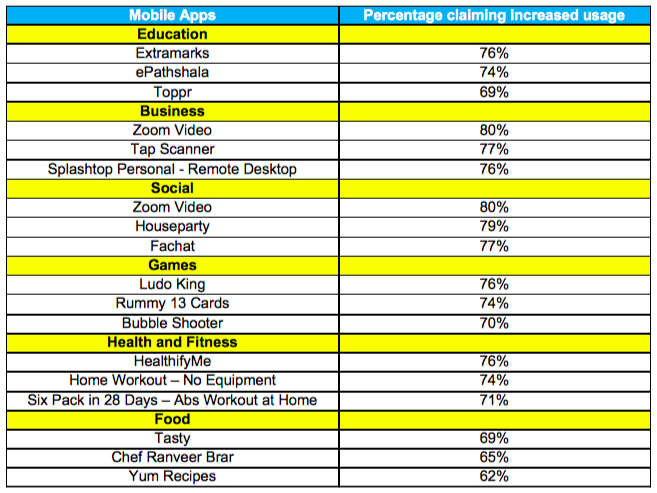 As more Indians turned to home-cooking during the week, they searched online for DIY cooking apps and searched for mobile apps to help them maintain their health and fitness.

“Undoubtedly, when we look back at the coronavirus pandemic, we will clearly see two distinct time periods An India before the virus, and a new one in the post-virus era. The digital habits are undergoing a dramatic change, with a fresh slew of consumer apps, benefiting from strong network effects in communication, entertainment, food and fitness, and enabling Indians like never before,”said Namagiri Anand, Managing Partner, Hammerkopf.

“Given the changing consumer pivot to new digital media, we are advising our clients to leverage the new opportunities. In the new homebound economy, brands are in a position to gain consumer mindshare and confidence, by being infotaining and informative, and, by being creative and connecting. Brands that are proactive and ahead of the curve will survive in the times ahead,” added Namagiri.

The Hammerkopf Consumer Snapshot Survey was aimed at capturing behavioral change in digital media consumption, as India stayed at home.