Fashion magazines are vehicles for luxury fantasies. They sell readers on consumerist dreams, sandwiching glossy images of supermodels and stars between advertisements for $50,000 watches and $250 moisturizers.The new coronavirus pandemic and lockdown orders have derailed those dreams.

Last week, Vanity Fair Italy’s cover star was not a supermodel lounging on a yacht in an Etro caftan, or a movie star in Gucci, but rather a lung specialist in a starched white lab coat.

Vogue Portugal opted for a monochrome image of two models kissing through face masks under the words “Freedom on Hold.”

Fashion magazines are vehicles for luxury fantasies. They sell readers on consumerist dreams, sandwiching glossy images of supermodels and stars between advertisements for $50,000 watches and $250 moisturizers.

The new coronavirus pandemic and lockdown orders have derailed those dreams. As a result, fashion magazines have been derailed both in production and purpose.

It’s not just that 2020 is set to be the worst year in the history of the modern luxury business, with supply chains in free-fall and media advertising budgets slashed. It’s not just that shoppers have stopped shopping, or that fewer people in the fashion industry, from seamstresses to salespeople, are able to go to work.

It’s that magazines were already a fraught business. It’s that many people have been re-evaluating their moral relationship with consumption. It’s that resentment and even rage has risen toward celebrities and other elites — a pampered pool of cultural figureheads who fill the pages of contemporary fashion publications.

And now there’s a pandemic to address.

While some international magazines have turned doctors into models, mainstream fashion newsstands look the same as ever: a lot of celebrities posing with half smiles, not a face mask in sight. Many editions on sale now were finished before the outbreak was declared a pandemic; monthly magazines with large circulations are typically produced two to three months before hitting newsstands or mailboxes.

And so Rihanna fronts the May issue of British Vogue as the first cover star to wear a durag. In the United States, Vanity Fair’s most recent cover has Reese Witherspoon dressed up in candyfloss pink ruffles; Town & Country has Gwyneth Paltrow power-posing in a crisp white suit; and Vogue has Gal Gadot — fresh off her “Imagine” video backlash — wearing sequins in the desert. (All four titles posted disclaimers on Instagram about how the issues were finalized before the pandemic.)

GQ’s April cover features a reclining Daniel Craig, who was promoting the new James Bond film, which has been postponed until fall.

While some editors were able to insert last-minute references to the pandemic in their May issues, print magazine readers shouldn’t expect to see coronavirus content in earnest until June. Which means that, unless the editors pull from older unused material, there will be no jet set photo shoots, in-person interviews or coverage of Champagne-soaked red carpet events — the fabric of most fashion magazines — this summer.

“The next wave of print stories that come out have been made with the coronavirus crisis in mind,” Will Welch, the editor of GQ, said, referring to the magazine’s June-July issue. “I wouldn’t want to look back at the GQ that we’re making during this time and have it feel like business as usual.”

Laura Brown, the InStyle editor, didn’t want to wait two months to address Covid-19 on the cover of her magazine. She opted to publish one online instead.

Via a Zoom call from her living room in New York last week, as sirens blared in the background, Ms. Brown described the task of being a fashion editor right now as “a constant balancing act.” In between stories about eye creams and tips on styling a denim jacket, her team (who are all working from home) had just produced a one-off digital cover featuring Dr. Jana Broadhurst, an infectious disease diagnostics specialist.

“As an effective editor, you need to read the room constantly,” she said. “Now we need to read it not just every day, but every hour and minute, registering appetites and anxieties that are constantly changing.”

“Offering some escapism and glamour is still important, but I’m less paranoid now about getting this celebrity for that cover, or a product exclusive,” said Ms. Brown, who is known for her close relationships with the Hollywood glitterati. (The InStyle May issue, published this week, featured Lady Gaga on the front cover.) “Readers are saying they want to see the everyday women currently doing extraordinary things being celebrated. We need to show that we are listening to them.”

Improvising Images in a No-Contact Age

How to run a magazine nimbly on an ever-receding budget has become an essential skill for editors. Some titles, W magazine among them, have already been forced to furlough staff and switch to survival mode given the new status quo.

That traditional business model had been sputtering for years. Douglas McCabe, the chief executive of the media research firm Enders Analysis, estimated that, on average, magazines are now looking at further advertising declines “in the major double digits.”

“We are talking about around 50 percent,” he said.

For fashion brands struggling amid mass retail closures, their print advertising isn’t a top priority. Moreover, few labels had time before the outbreak to photograph their fall 2020 ad campaigns, which form the backbone of magazines’ all-important door-stopper September issues. 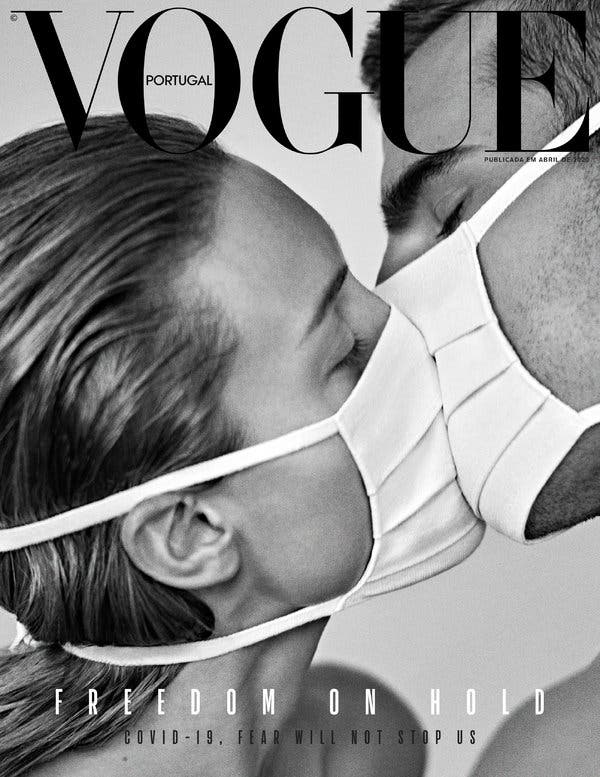 Similarly, magazine editors haven’t been able to shoot their own editorial content at their normal speed and volume. Photoshoots require people traveling and working together in close quarters: the photographer and the models, but also assistants and stylists of many stripes.

“It would be irresponsible to put people together to do anything at all right now,” Mr. Welch said. “We’re thinking about how we can get new visuals of people from quarantine.”

In upcoming issues of GQ, some subjects are photographing themselves at home with their own devices — instant cameras and iPhones — in consultation with photographers; others will be represented without photography.

In some cases, illustrations will replace traditional portraits. Italian Vogue was ahead of this curve in January, when it eliminated photography as an exercise in sustainability — not necessity.