Two weeks ago, Google started showing users in Australia a popup message, warning that some of the company’s services might be impaired as a result of a proposed content-licensing law, which would require large digital platforms to pay publishers in return for linking to their articles. At the time, Facebook said it had no public comment on the proposed law. That changed rather dramatically on Monday: the company’s senior executive in charge of Australian operations published a statement saying if the law goes ahead, Facebook will block publishers and people in Australia from sharing any local or international news on the social network or its photo-sharing service, Instagram.

The statement said that the proposed legislation “misunderstands the dynamics of the internet and will do damage to the very news organisations the government is trying to protect.” The competition authorities who came up with it, Facebook said, “ignored important facts, most critically the relationship between the news media and social media and which one benefits most from the other.” 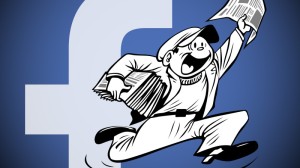 After Google released its own open letter to Australian users—or rather, two of them, since the head of YouTube in Australia also published one—the Australian government quickly posted a response, accusing the search giant of misstating the facts about the legislation and how it would impact Google’s services. It did the same with Facebook on Monday, publishing a statement that said the company’s threat to block users in that country from sharing news was “ill-timed and misconceived.” The government release went on to say that the draft legislation, known as the News Media Bargaining Code, is designed to ensure that Australian news businesses, including independent and regional media, “can get a seat at the table for fair negotiations with Facebook and Google.” The statement also noted that Facebook already pays some publishers for their news, and added that it hoped “all parties will engage in constructive discussions” while the draft law is going through the legislative process.

In the post where he mentioned the potential for a news ban, Will Easton, Facebook’s managing director for Australia and New Zealand, called the idea that the company should pay publishers for their content “perplexing.” The new code “presumes that Facebook benefits most in its relationship with publishers, when in fact the reverse is true,” Easton wrote. “News represents a fraction of what people see in their News Feed and is not a significant source of revenue for us.” Just as Google often does when such things are mentioned, the Facebook executive spoke about the billions of clicks that the platform sends to publishers, who place their content on the social network voluntarily, and how those clicks are worth hundreds of millions of dollars in advertising revenue. (This arithmetic, of course, ignores the fact that Google and Facebook have taken control of a majority of the online ad market, leaving traditional publishers scrambling for whatever crumbs are left). And Campbell Brown, the head of Facebook News, wrote about how much help the company has been providing to publishers through its $300 million Journalism Project.

The fact that the Australian government’s response specifically mentioned “independent, community, and regional media” as beneficiaries of the proposed law seemed designed to address one of the main complaints about it, which is that the primary beneficiaries will be billionaire media owners like Rupert Murdoch, who owns a significant proportion of the country’s newspapers and magazines and has been accusing Google and Facebook of “stealing” his content for a decade or more. Some media analysts, however, argue that if the Australian government—or any other government—wants to provide some help to the struggling mainstream media industry, forcing Google and Facebook to pay for linking to their content is the wrong way to go about it, since the actual economic value of those links is debatable. Better to levy some kind of digital tax if financial support is the goal, some argue, and then use that to create a public fund that media companies can access.

Google has been down this road a number of times, and is not afraid to play rough: in 2014, when Spain passed a law to force it to pay for news, the company removed the entire country from its news index. It did the same with German publishers after a law was passed there requiring it to pay for links, and many saw their traffic plummet as a result. In France, it said it would only show headlines, so that it wouldn’t have to pay for excerpts. Despite the saber-rattling by Google and Facebook, however, the Australian government seems to be holding firm so far. “We don’t respond to coercion or heavy-handed threats wherever they come from,” said Australian treasurer Josh Frydenberg. “Our reforms to digital platforms are world-leading and following a groundbreaking 18-month inquiry.” And Rod Sims, the head of the country’s competition regulator, told the Financial Times that Facebook and Google would have to remove all international news from their platforms, not just Australian news, or they could face fines that might run into the hundreds of millions of dollars.