The Justice Department filed an antitrust lawsuit Tuesday against Alphabet Inc.’s GOOG 1.39% Google, alleging the technology company engaged in anticompetitive practices to achieve and sustain its market dominance, The Wall Street Journal reported. While the suit focuses primarily on Google’s core internet search business, the Justice Department is separately continuing to investigate Google’s awesome power in digital advertising. States are pursuing a separate probe of Google; some are joining the Justice Department case. Here’s a look at why Google’s businesses are under so much scrutiny:

What does the lawsuit allege?

The Justice Department alleges that Google is illegally maintaining its monopoly in search through exclusionary contracts with distributors like mobile-phone makers, wireless carriers and web browsers to make Google their default search engine. As a result of these agreements, which involve Google paying out billions of dollars to distributors each year, Google owns or controls search distribution channels accounting for about 80% of the general search queries in the U.S., according to the government’s complaint. These agreements thus prevent competitors from being able to get any kind of meaningful foothold, the government argues.

Google’s chief legal officer said in a statement that the suit was flawed and that consumers use Google because they chose to, not because they are forced or lack alternatives.

What areas of business does Google dominate?

Having invented the modern search engine, Google continues to dominate this primary portal to the internet. The company is a big force in other areas of consumer technology, from online video (YouTube) to maps (Google Maps). Its Chrome browser controls about 70% of the global online browser market, and roughly half the market in the U.S., according to StatCounter. About 85% of smartphones globally run its Android operating system and about 56% do in the U.S., according to market research firm IDC. Google makes money selling ads in its products.

If you’re buying or selling an ad elsewhere on the web, chances are very high you’re also doing business with Google. Google sucks up about one in every three dollars spent on digital advertising and generated nearly $135 billion in total ad revenue in 2019. Google’s critics in government and industry say it has amassed this market power through anticompetitive practices.

In a blog post responding to competition concerns, Google said it operates “across many highly competitive sectors where prices are free or falling and products are constantly improving.”

Does Google have any serious competition in answering search queries?

When it comes to general search, there is no getting around Google’s dominance. On mobile, Google handles 95% of search queries in the U.S., according to StatCounter. On desktop, its share is 81%, with Microsoft’s Bing as the next largest player with a 13% share of user queries. Google Search generated some $98 billion in revenue in 2019.

Google argues that regulators should actually be considering search queries made by people who are ready to buy something and are most valuable to advertisers. In this realm, Google says, “competition is particularly intense” and Amazon is a rising competitor.

Even when looking at the search market in this way, Google is still dominant, winning about 63% of all search ad revenue in the U.S., according to research firm eMarketer.

The Justice Department, like other regulators around the world, is focusing on deals like the billions of dollars Google has been paying to Apple Inc. to be the default search engine in the iPhone’s Safari browser.

In 2018, the European Commission fined Google more than 4 billion euros for putting restrictions on its Android operating system that effectively forced traffic into the Google search engine.

“Our success is based on providing the best results, and if we’re not, users can quickly and easily switch to rivals,” Google said in its blog post.

How does Google use search to help its other businesses?

Critics say Google’s search function favors its own properties, including in areas such as travel and local business reviews. These complaints have become more urgent as the rise of mobile phones has shrunk the amount of space available to display results. Some Google competitors say this pushes their results “below the fold,” as the Federal Trade Commission put it during its past investigation into the issue. In some cases, Google answers questions such as “When is the next flight to Boston?” with flight times from its own service, rather than sending users a link to another website.

Google has argued that this is simply a more user-friendly way to answer searches. In 2013, the FTC said it essentially agreed, closing an investigation into alleged search bias by Google.

What role does Google’s technology play in displaying ads across the web?

In automated online advertising, there is a chain of middlemen between the companies who want to buy ads and the websites—say, news sites or blogs—that are putting their ad space up for sale. Google owns the dominant product at each link of that chain. The company became a major player in this area after its 2010 acquisition of the ad tech company DoubleClick and has expanded over time.

Google argues in its blog post that the online advertising space is “famously crowded” with competitors.

Online ads are typically sold in auctions that happen in an instant, when a user’s webpage is loading. Google dominates at virtually every step of the process. Here’s how the digital advertising machine works: 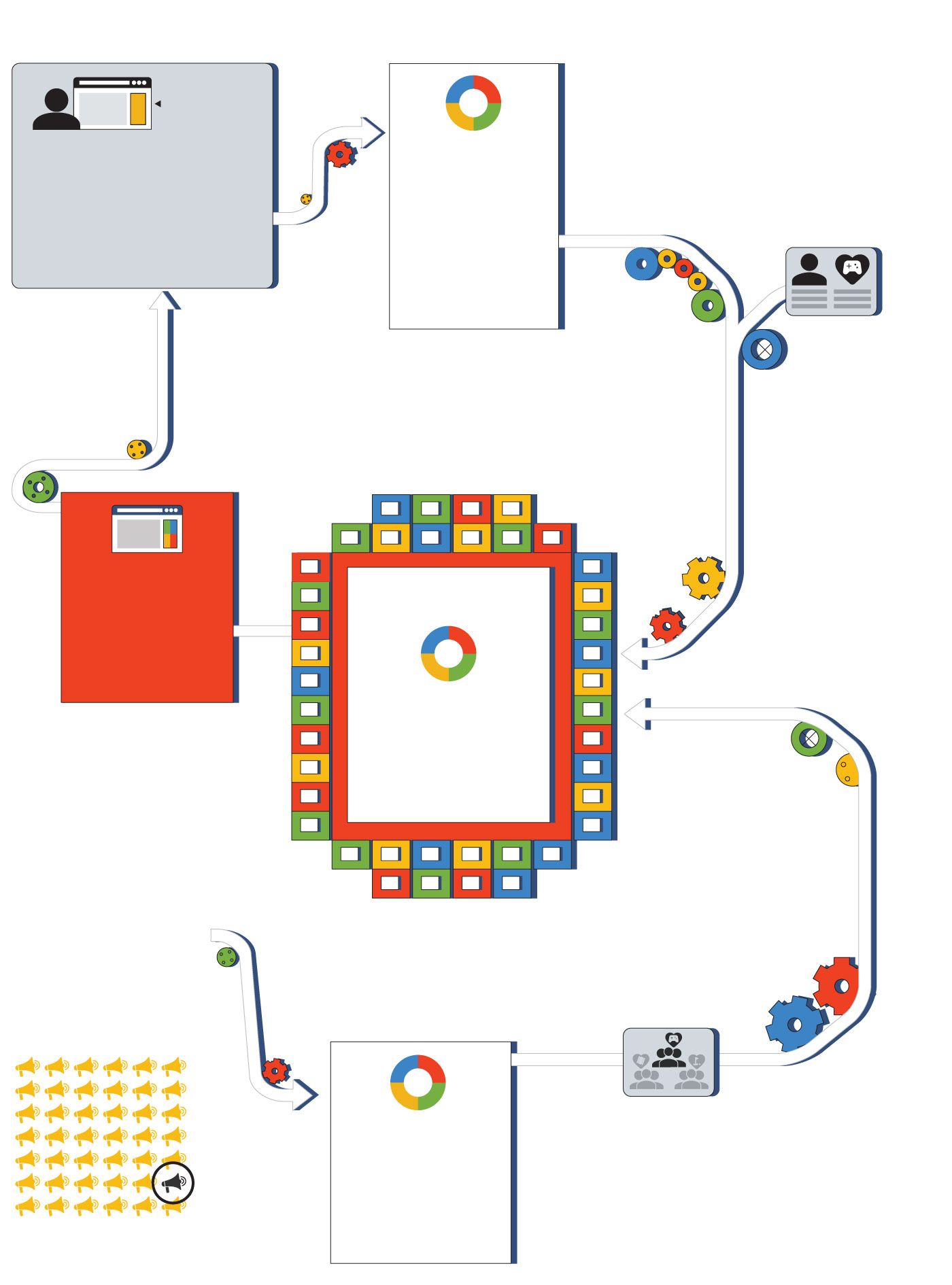 THE SELL SIDE: PUBLISHERS

The publisher also gives the exchange information about the reader—age, income, browsing history and interests, for example.

In this example, the publisher uses Google’s DoubleClick for Publishers, the leading ad-serving tool.

When a user visits a large online publisher’s website or app, the publisher uses an ad server to sell ad space on its pages.

The tool puts the publisher’s ad space up for sale on exchanges, marketplaces where transactions happen in real time between sellers (publishers) and buyers (advertisers).

Once a match is made on the exchange, an ad pops up on the user’s screen.

Google has the largest such marketplace, the DoubleClick Ad Exchange, or AdX.

To get its ad in front of the user, the advertiser places bids in the auction marketplace—and the highest bidder wins.

THE BUY SIDE: ADVERTISERS

The advertiser can specify the types of audiences it wants to target—such as location, gender or age of user—and the price of the offer.

In this example, an advertiser uses Google’s buying tool, DV360, the industry leader.

Does Google use that clout to gain an undue advantage?

Google’s competitors, advertisers, online publishers and U.S. lawmakers from both parties have all alleged that Google is exploiting the conflict of interest inherent in this vertical integration—in which Google represents the buyer, seller and auction house of these rapid-fire online ad sales. In addition, Google is a direct competitor to the publishers selling the ad space.

The critics also allege Google has tied its products together in ways that harm competition. For example, in 2016, Google began requiring ad buyers to use Google’s ad-buying tools to access advertising on YouTube, prompting a wave of complaints from rivals alleging it was leveraging YouTube’s “must-have” status to prop up its ad buying tool.

Publishers have complained that Google has given itself an unfair advantage in online ad auctions, tilting the process in ways that hurt publishers and helped its own advertising exchange.

Google has denied using its tools in an anticompetitive manner, arguing that it has made them “interoperable” with rivals and that publishers and advertisers have many choices of advertising technology tools.

Google and its supporters say its dominance in advertising has lowered ad prices and allowed it to offer free services to consumers. Some regulators around the world and U.S. antitrust experts see another side of the story. They say companies wind up having to charge consumers more for goods and services than they otherwise would if the online ad market were more competitive.

They also argue that consumers are forced to give up more data to these products—on their usage habits, interests, location and more—than what would represent a fair exchange. And they say consumers are missing out on innovative products that a more competitive marketplace would yield. Finally, they argue that the online search and advertising marketplace is malfunctioning in a way that is contributing to the decline of local journalism and the rise of misinformation.

Write to Keach Hagey at keach.hagey@wsj.com