Harrowing accounts have emerged of the Taliban detaining and brutally assaulting reporters covering a protest in Kabul earlier this week, with one Afghan journalist telling CNN he thought he was going to die.Video journalist Nemat Naqdi and video editor Taqi Daryabi from the Afghan online news outlet EtilaatRoz said they were detained while covering a women’s protest against Pakistani involvement in Afghanistan and in support of women’s rights that took place on Wednesday.The protest was outside a police station, and Naqdi and Daryabi said they were taken inside the station and severely beaten.

“They were hitting me with extreme force that I really thought that this was the end of my life,” Naqdi told CNN on Friday. “They have hit me on my arm with extreme force that I could not move it during the last two days … it has got better. My left eye has been hurt seriously that it is still red, and I am worried, my left ear can’t receive any hearing. It has a buzzing noise. I was given four or five very hard slaps on my face.”

“They stepped on my head on the other side and they were pressing their foot on my head, my face was on the mosaic floor, and I was trying to pull myself due to the pain and to tell them to hit me on all sides and not just hit me on my back. For that reason, my face was bloodied,” Naqdi said.”They were using such violence that one was holding me by my head and face and another one was holding me by my waist. My hands and feet were tied and one of them was pushing my legs like a sling. I had a feeling that my neck may break, or my back may break,” Naqdi added. 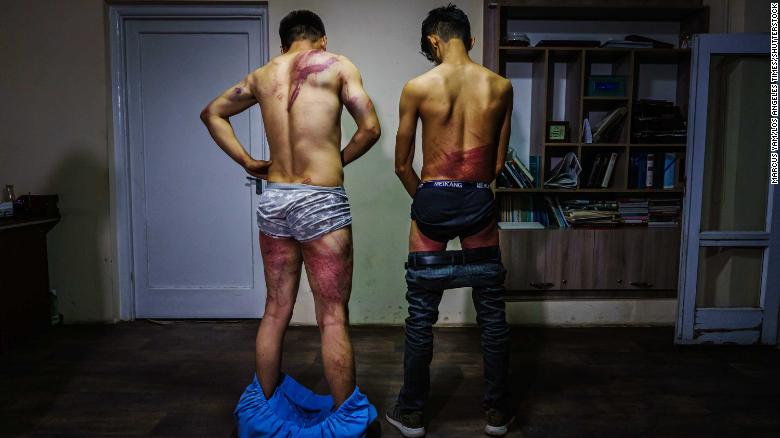 Nemat Naqdi (left) and Taqi Daryabi undress to show wounds sustained after Taliban fighters beat them while in custody on Wednesday.”When the Taliban forces arrested us and took us to the police station, they continuously tortured me for approximately 10 minutes even though I was not in state to remember the exact time. They hit me with whatever they could grab hold of,” Daryabi said.”It is possible that from now on the Taliban threaten and torture journalists. The continuation of their activities will be deemed as a danger to their government,” Daryabi added.”They declared to the journalists in a press conference that they will be granted permission to continue with their activities but only under the Islamic rules. I believe those threats are still present. The journalists will not stop, they are a different sector of the society, and they are people who convey the voice of the population,” Daryabi added. “They become the voice of the people.”CNN has reached out to the Taliban but has not received a comment at the time of this writing.Zaki Daryabi, Editor-in-Chief of EtilaatRoz, told CNN he hoped that “in the first step, the Taliban leadership would respond to this continuous and brutal torture of our colleagues; and they would reprimand those who had committed this crime and act of torture in police district three; they would subject them to [legal] prosecution.””Secondly, we expected the Afghan and international media not to present this as an attack on EtilaatRoz [daily]; to present is as an attack on all media and discussion of freedom of expression,” Zaki Daryabi added.

The Taliban want to lay down the law. Far outside Kabul, rural Afghans just want to get paid . Nemat Naqdi and Taqi Daryabi were among at least 14 journalists detained over the course of two days while covering protests in Kabul, according to the Committee to Protect Journalists (CPJ). At least six of the journalists “were subject to violence during their arrests or detention,” according to CPJ.”The Taliban must immediately cease detaining journalists in Afghanistan, end the use of violence against them, and allow the media to operate freely and without fear of reprisal,” CPJ said in a statement.

The protests took place in the Dasht-i-Barchi area of Kabul, mostly inhabited by people from the minority Shia Hazara ethnic group known to have been targeted by the Taliban in the past.Some protesters were also detained but it is not yet clear how many. Witnesses have estimated the crowds at the protests at between 300 and 500 — some of the largest demonstrations since the Taliban took control of Kabul.