Rolling Stone published an errant story in November concerning charges by a woman identified as “Jackie” that she was gang-raped by seven men at the Phi Kappa Psi fraternity in 2012 is no secret. The story was exposed as factually flawed within days of publication.  Rolling Stone needs to own up to its failings, says Pressdemocrat.com editorial posted on 11.04.2015 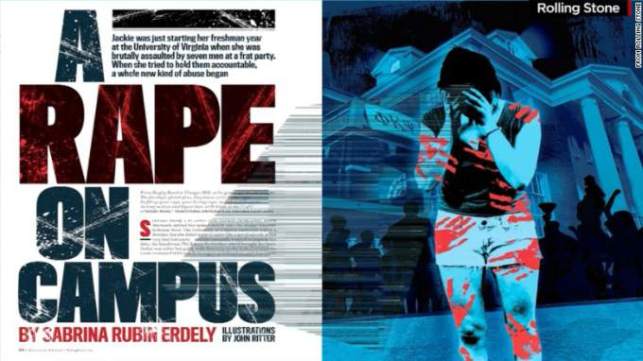 That’s the kind way of describing how Rolling Stone magazine mishandled the coverage of an alleged rape at a University of Virginia fraternity — and how it continues to gloss over the gravity of its blunders.

That Rolling Stone published an errant story in November concerning charges by a woman identified as “Jackie” that she was gang-raped by seven men at the Phi Kappa Psi fraternity in 2012 is no secret. The story was exposed as factually flawed within days of publication.

What came to light this week were the circumstances under which the story was published. And the details, revealed by a comprehensive Columbia University Graduate School of Journalism investigation, are cringe-worthy.

But the central problem was a systemic breakdown in industry-accepted standards for the verification of facts. In this case, there was little.

It centered on the inexplicable decision by the principal reporter and editor on the story — and higher-ups who acquiesced by their silence — not to seek out a response from Jackie’s alleged assailants nor to talk to the woman’s friends who, based on their knowledge of what happened on that evening of Sept. 28, 2012, would likely have raised enough red flags to steer the publication in another direction.

Making matters worse, Rolling Stone has been slow to own up to its failings, instead putting much of the blame on Jackie, someone whom Jann Wenner, publisher and co-founder of Rolling Stone, called “a really expert fabulist storyteller.”

That may be true, but the authors of the analysis report itself were quick to dismiss such blame.

“It was a product of failed methodology,” said Columbia University Journalism School Dean Steve Coll, one of the authors. “We disagree with any suggestion that this was Jackie’s fault.”

Meanwhile, the magazine, which didn’t retract its story or pull it from its web site until Sunday, has said the jobs of the main reporter and editor on the story are safe.

Rolling Stone needs to own up to its failings. This woman’s allegations never would have been made public without the magazine’s willful mishandling of the charges and pursuit of the facts. The story has done significant damage to the reputation of the University of Virginia and this fraternity, to the publication’s own credibility and, more important, to the campaign for greater attention on the very real problem of sexual assaults on American college campuses.

“This type of reporting serves as a sad example of a serious decline of journalistic standards,” Stephen Scipione, president of the Virginia Alpha Chapter of Phi Kappa Psi, said in a statement.

We hope that is not true, even amid the explosion of digital-based news platforms where sometimes accountability is scarce. If anything, this story shows there’s still a need for good investigative journalism. Because one thing is true: We certainly know it when we don’t see it.