The images were shocking but not unexpected — a bedraggled Julian Assange removed from the Ecuadorean embassy in London Thursday by British police after nearly seven years of confinement. The Wikileaks founder had finally reached the end of his long and contentious asylum. And his much-delayed encounter with justice has arrived.

Assange, Wikileaks and their supporters maintain that Britain, by arresting Assange on a US extradition warrant, is an accomplice to an assault against press freedom, arguing that their work, obtaining and releasing massive amounts of secret data, is not a crime.
But Assange’s claim that he is a journalist is false, as he has proven time and again. That he is not a journalist, however, will not preclude authoritarian governments from using his case to thwart the legitimate media.
Assange should face justice, but the process will be a perilous one for the free press. If handled correctly by the courts, it should result in the development of a functioning definition of what a journalist is, depriving propaganda outlets and government agents of using the label to take cover — and providing the press with the protection it needs to inquire, investigate and report.
Assange entered Ecuador’s embassy in 2012, fleeing potential extradition to Sweden, where he faced sexual assault charges. Sweden dropped the case on a technicality, but prosecutors say they may reopen that case.
In the embassy, Assange, who suffers no shortage of self-regard, became a nightmare for his hosts. Then-President Rafael Correa, an ally of Russian President Vladimir Putin,granted him asylum and citizenship, which has now been suspended. But his successor, President Lenín Moreno, had little patience for his troublesome guest. Assange interfered in other countries’ politics and created foreign relations problems for Ecuador. 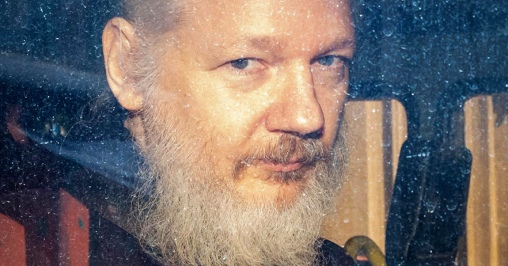 On Thursday, Moreno announced a deal with the UK. Assange, he said, had “repeatedly violated asylum conventions,” breaking into embassy archives and mistreating guards. The British, Moreno said, gave written assurances that they would not extradite him to a country where he could face the death penalty, a point sure to receive scrutiny.
Much of what will come next centers on whether Assange is a journalist. Edward Snowden, under asylum in Russia after he released secret US government documents, called the arrest “a dark moment for press freedom.” Wikileaks maintained the United States wants to “prosecute a publisher for publishing truthful information.” But history undercuts their claim.
Assange and Wikileaks captured headlines and rocked government in 2010, when they released a trove of Pentagon and State Department documents stolen by Chelsea Manning, an Army intelligence analyst. Assange reveled in his fame and declared himself a champion of “radical transparency.” Over time it became evident that his quest for transparency was not universal. Instead, Assange and his group have shown their agenda is anything but that. They are curiously selective in their targets, and their work has hewed closely to Putin’s agenda.
Wikileaks figures prominently in the Mueller investigation of Russian interference in the 2016 election. The July 2018 indictment of 12 Russian agents describes how GRU, Russian military intelligence, worked closely with “Organization 1,” Wikileaks, in its conspiracy against the United States.
Assange worked diligently to advance Putin’s goals. The Russian President wanted Hillary Clinton to lose, and Assange went out of his way to help. There is ample evidence from Wikileaks and from Guccifer 2.0 — a persona created by GRU to cover its tracks — that the Russians stole Clinton’s campaign emails and gave them to Wikileaks to reveal at the most harmful possible moment.
Assange also made extra efforts to smear the Clinton campaign, advancing conspiracy theories he knew were false. After Seth Rich, who worked at the Democratic National Committee, was killed in a robbery, far-right activists and media promoted the claim that he had been killed by Clinton supporters after releasing DNC documents to Wikileaks. Assange knew that was not true because Wikileaks got the emails from Russia. And yet he stoked the fires, helping Russia camouflage its spy work.
In an interview on Dutch television, he said provocatively, “there’s a 27-year-old who works for the DNC who was shot in the back, murdered for unknown reasons.” When the interviewer asked what he was suggesting, Assange replied, “I’m suggesting our sources take risks…”
That is not the work of a journalist. It looks much more like the work of a man deliberately collaborating with a hostile foreign power to deceive the public.
A look at the subjects of Wikileaks revelations shows a similar pattern. Much of the material they have distributed undercuts the United States, particularly its diplomatic and security operations. In contrast, they have revealed very little about Russia.
In 2017, amid intense concerns about Russia and Wikileaks’ role in the 2016 election, the group released something it called the “Spy Files Russia.” Lily Hay Newman of Wired wrote the data dump was “fishy,” saying it was different from other Wikileaks material, with much of it already public — suggesting the release was approved by Russia, “meant to defray criticism” that the Kremlin and Wikileaks had worked together.
But while Assange is not a journalist, his arrest does present a potential threat to other journalists. One can easily foresee someone like President Donald Trump using the precedent against others reporting information he doesn’t like. If a man who claims he is a journalist can be arrested and prosecuted for his work, others could also be charged.
But what is a true journalist? Definitions abound. For one, according to the American Press Institute, journalists should aim to pursue the truth, “assembling and verifying facts … (and trying) to convey a fair and reliable account of their meaning.” Deliberately lying, as Assange did on the Rich case, shows he is not a journalist and therefore not entitled to the protections that the law — and democracy — demand for legitimate journalists.
Assange’s actions over the years have sent shockwaves around the world. His dramatic arrest and its aftermath could end up having the greatest impact of all.
CNN EDITOR’S NOTE : Frida Ghitis, a former CNN producer and correspondent, is a world affairs columnist. She is a frequent opinion contributor to CNN and The Washington Post and a columnist for World Politics Review. The opinions expressed in this commentary are those of the author; view more opinion articles on CNN.